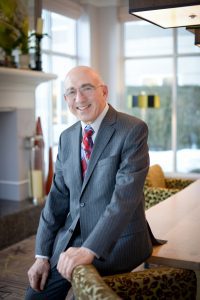 Way Finders, Inc. announced today that President and CEO Peter Gagliardi will retire in June 2020 after more than 28 years of service to the organization.

Since 1991, Gagliardi has served communities in Western Massachusetts at Way Finders. He has seen the organization through significant growth, including the restoration and development of over 1,000 units of affordable housing, becoming a chartered member of NeighborWorks America in 2008, and most recently, the construction of a new Housing Center in downtown Springfield that is due to open its doors in April 2020.

Under Gagliardi’s leadership, Way Finders has become the largest nonprofit housing provider in Western Massachusetts. Last year the organization impacted the lives of over 50,000 men, women, and children by providing housing counseling, emergency shelter, affordable housing development and management, financial education and first-time homebuyer workshops, employment training and retention services, and neighborhood revitalization. Governed by a 21-member Board of Directors, Way Finders and its subsidiaries, Common Capital, Inc. and MBL Housing and Development, has a staff of over 240 employees and an annual budget, including its subsidiaries, of $77 million.

Way Finders’ Board of Directors has formed a hiring committee and has engaged Marcum LLP to lead a national search for a new CEO beginning in January.