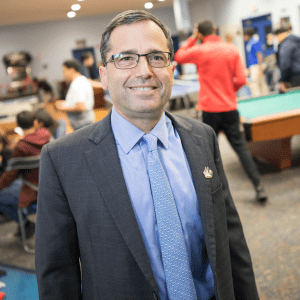 Josh Kraft, president of the New England Patriots Foundation and Nicholas President and CEO of the Boston Boys and Girls Clubs, will speak at the first Springfield Regional Chamber Rise & Shine Business Breakfast of the 2019-2020 season on September 4, at the Sheraton Springfield. The breakfast begins with networking at 7:15 a.m.

At the breakfast, the Chamber will also recognize these Member Milestones: The Lexington Group for its 30th anniversary and Marion McGowan, recently named president and CEO of Health New England and vice president of payer innovation for Health New England.

Kraft will talk about how social change begins in our own communities, one person at a time, through simple acts by individuals.

“It can be as simple as volunteering at a food pantry, as risky as making a mid-life career change to human service, or as ambitious as running for local office to make an impact where big changes can actually happen,” Kraft wrote in an Op-Ed for The Boston Globe.

“We can all take action close to home, Kraft said, “It’s the quickest path to making an impact.”

A graduate of Williams College, Kraft earned a Master’s degree in education and social policy from the Harvard Graduate School of Education. He has been involved with the Boys and Girls Clubs of Boston for more than 25 years. Prior to accepting his current role as Nicholas President and CEO, Kraft was the Founding Executive Director of the Boys and Girls Clubs of Boston’s Gerald and Darlene Jordan Club in Chelsea. Prior to the completion of that club’s state-of-the-art facility, Kraft led an after-school program from the basement of a public housing development for 15 years.

Reservations are $25 in advance for Springfield Regional Chamber members ($30 at the door) and $35 for general admission ($40 at the door). Click here to make a reservation.

Passes for the breakfast series are available. The Rise & Shine Breakfast pass offers members the convenience of purchasing reservations for all five Rise & Shine Business Breakfasts in advance with one transaction. The purchase of a pass also includes complimentary admission to the Multi-Chamber ”Trunk“ Show/Networking Night in December at Mercedes-Benz of Springfield. Cost of a pass is $125 – a savings of $10. Passes are transferable to co-workers.

Breakfast passes, which include all five breakfasts and an additional event, are available here.