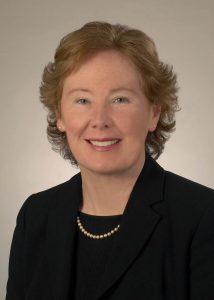 The Directors of The Irene E. & George A. Davis Foundation announced the retirement of Executive Director Mary Walachy. Walachy has been associated with the Davis Foundation for the past 23 years and will retire in June of 2020.

Upon her formal retirement in June, Walachy will continue to represent the Davis Foundation in its role as philanthropic lead for the new Educare Springfield early education center, which is the 24th Educare in the country and the first in Massachusetts.

Hired in 1997 as the first executive director of the Foundation, Walachy’s responsibilities have included development of the organization’s strategic direction, general oversight of its administration, and developing proactive and new funding initiatives.

Under Walachy’s leadership, the Foundation established several signature initiatives, including Cherish Every Child, the nationally recognized Reading Success by 4th Grade initiative, the Funder Collaborative for Reading Success, the establishment of Springfield Business Leaders for Education and the launch of Educare Springfield.

Walachy was named “Woman of Distinction” by the Pioneer Valley Girl Scout Council in 2005.  She received an Honorary Degree from Springfield Technical Community College, and most recently was awarded the 2015 Humanics Achievement Award from Springfield College.

Under Walachy’s direction, the Davis Foundation has received national recognition for its work, including a feature in the National Center for Family Philanthropy and in the Council on Foundations’ book, “The Giving Family.”  In addition, Springfield was twice named an All-America City by the National Civic League and has also been recognized as a Pacesetter Community by the national Campaign for Grade-Level Reading from 2012-2017.

The Davis Foundation has engaged a consultant and has initiated the national search firm Isaacson, Miller to identify a new executive director.