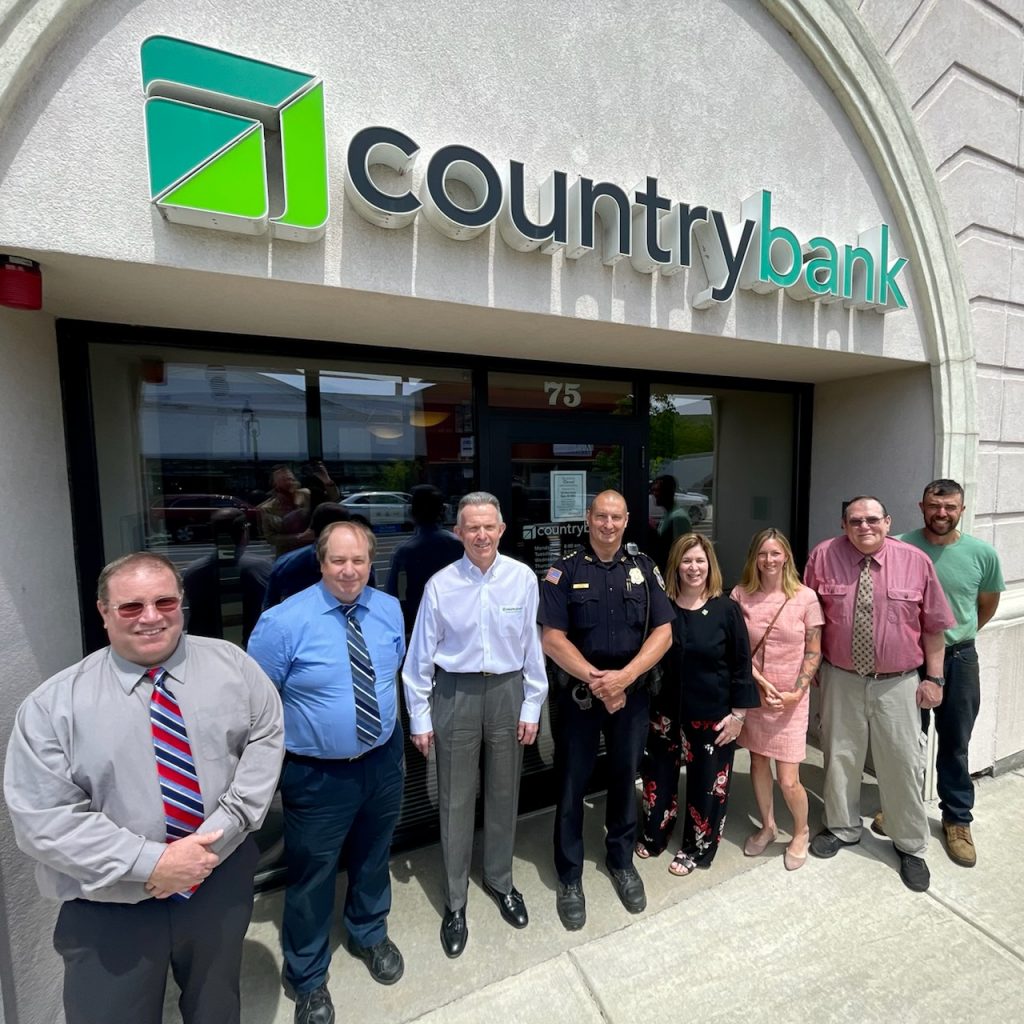 June 1, 2022 – Country Bank, a full-service financial institution serving Central and Western Massachusetts, is pleased to announce that it is donating its former corporate headquarters building at 75-79 Main Street to the Town of Ware. Currently vacant, the building will become the new site of the Town’s police station and other multi-purpose space, if approved by the Town at a future town meeting.

Although the Bank looked at various options for the building and was approached by several developers who expressed interest in acquiring it, the Bank’s Board of Trustees wanted to ensure that it was repurposed into something that would make a difference to the Town for generations to come.

“The people of Ware and Country Bank have supported one another for more than 172 years,” said Chair of the Board James Phaneuf. “We wanted to find a way for this legacy to continue and maintain the prominence of the building on Main Street.”

Country Bank has been a mainstay in the downtown area serving local businesses and residents since 1850. The building, however, has been significantly underutilized since the Bank moved its corporate headquarters, along with more than 140 team members, to 15 South Street back in 2005. At the time of its move, the Bank had outgrown both the 75-79 Main Street location and its Operations Center across the street in the former Brooks Pharmacy building.

The Bank had maintained a branch office on Main Street until the pandemic hit and closed it at that time due to staff and customer safety concerns.

“Not maintaining a presence on Main Street was a tough decision that required months of consideration while assessing how this location might be best utilized to support the community,” said Paul Scully, President and CEO of Country Bank. “The effects of the pandemic combined with a significant decrease in customer foot traffic over the years and a shift in banking habits to more customers adopting electronic delivery channels were all a considerable part of the decision. It is a massive building to be sitting empty. The decision to donate the building became evident as we weighed the usage of this location and discussed the opportunities it could provide to the Town.”

Country Bank’s West Street location is less than a mile away and has seamlessly served all customers for the past two years.

“The building, both beautiful and historical, has been well maintained and offers many possibilities for uses that will be explored,” said Keith Krukus, Former Select Board Chair. “As a lifelong resident of Ware, I can’t remember when Country Bank has not been a leader in volunteering or leading the way with donating and participating in events. Over the years, Country Bank has grown, but they have always been a hometown bank at its core; it shows through its dedication and commitment to the Town with this significant donation. We know they had other opportunities but chose to make sure whatever happened to this building was a good fit for the town. This is a huge shot in the arm for the Town to help revitalize downtown and have a significant presence on Main Street. I can’t thank Mr. Scully and everyone at Country Bank enough for their extreme generosity.”

The property, valued at approximately 3 million dollars, includes the former banking office located on the corner of Main and Bank Street along with the E2E building located at 79 Main Street, the rear parking lot and bunker style garage, and rooftop parking situated behind the 65-71 Main Street location that was also donated by Country Bank to the Quaboag Valley Community Development Corporation back in 2016.

“The Town does not have the words to express our gratitude to Country Bank for this tremendous gift and opportunity,” said Stuart Beckley, Town Manager. “Over the past several years, we have worked hard to breathe life back into our downtown area. We couldn’t be more excited about the opportunity this brings to Main Street, and to our Police Department.”

The Police Department had moved to its current location 20 years ago as a temporary fix when it left the Town Hall—and has long since outgrown this space.

“On behalf of the entire Police Department, we are incredibly excited by this considerable gesture from Country Bank, a true community partner,” said Shawn Crevier, Chief of Police. The department is looking forward to having dedicated offices, training rooms, expanded locker rooms, and space to accommodate the full-time and part-time force. It is also only steps away from our current station, which we think is great.”

Although there is no specific timeline for the transfer of ownership as it needs approval from the Town at a scheduled Town Meeting, the Bank intends to work on a smooth transition with all parties involved and expects the transfer of the location to happen in 2023.

On June 1, Country Bank introduced its enhanced brand position, Country Bank – “Made to Make a Difference,” as it reflects what the bank has always been doing—making a difference for its customers, colleagues, and communities. The tagline evolved from a series of focus groups with customers, team members, board members and non-customers who had gathered to discuss their experiences with the bank and their knowledge of the bank’s impact on the people and communities it serves. The tagline is in the process of being trademarked.

Country Bank is one of the most highly capitalized mutual savings banks in the Commonwealth offering full-service consumer and commercial banking services. Country Bank serves Central and Western Massachusetts with 14 offices in Ware, Palmer, West Brookfield, Brimfield, Belchertown, Wilbraham, Ludlow, Leicester, Paxton, Charlton, Springfield and Worcester. Country Bank is a member of FDIC, DIF and the SUM network. Country Bank can be reached at 800-322-8233 or online at countrybank.com.