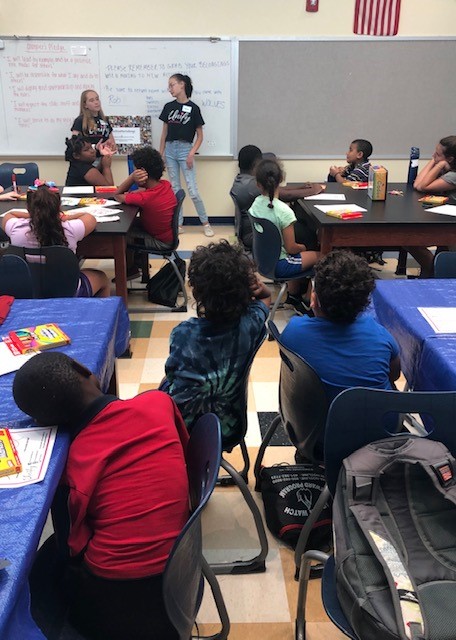 For the month of July, Sheriff Nick Cocchi’s Youth Leadership Academy summer camp is being held at the Elias Brookings School in Springfield. Unify Against Bullying was invited to be a part of the inaugural event.  Unify student ambassadors spoke to the campers, who are between six and 12-years old, about what bullying is and the effects it can have.

Each camper was given a Unify Against Bullying wristband and a package of colored markers to take home. The campers completed an art project, “The Faces of Bullying,” which required them to draw the face of someone who has been bullied and then draw in the face of what someone looks like when a person sticks up for them and says STOP bullying! The project is designed to create a dialogue on feelings and encourage the campers to share their feelings.

Several of the campers, who had never before shared their experience, told Unify  student ambassadors Julianna Zemba, Cheyenne (Chi Chi) Capella, and Kylie Simmons how they had been bullied.  Zemba, Capella, and Simmons shared their personal stories about how they had been bullied and also shared information with the campers about how to recognize bullying and how to be an “Upstander” instead of a bystander.  At the end of the presentation, the campers recited the Unify Against Bullying Pledge, signed and dated it and were encouraged to take it home to create a conversation with their parents, siblings and friends.  Choosing kindness and respect for all was the take away from the day.  The ambassadors taught the students to remember the Unify motto, “When we stand together, we stand as one.”