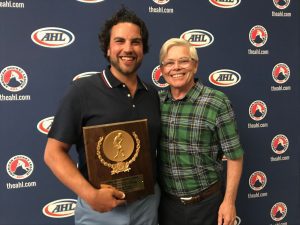 Costa was recognized at a gala reception during the Board of Governors’ Annual Meeting at Hilton Head, S.C. The James C. Hendy Award is named for the late Jim Hendy, a member of the Hockey Hall of Fame and AHL Hall of Fame and longtime statistician and historian for the AHL who won four Calder Cups as general manager of the Cleveland Barons.

In addition to Costa’s recognition for the Hendy Award, the Thunderbirds were also recognized in Hilton Head for excellence in digital marketing for the 2018-2019 season in the Eastern Conference.

These awards add to two business honors from the AHL for marketing excellence and surging attendance that were given to the Thunderbirds at the 2019 AHL Marketing Meetings in June in Charlotte, N.C.

Representatives from the Thunderbirds organization accepted the AHL award for Marketing Campaign of the Year for the continuation of the Thunderbirds #RiseUp campaign and initiative. The team was also recognized for a remarkable 15% increase in per game Full Season Equivalents, demonstrating the continued growth of the franchise’s fanbase throughout the region.

The #RiseUp campaign has become a rallying cry for Springfield hockey, visible through the Thunderbirds digital and media platforms. Its meaning is three-pronged: it emphasizes the high-level  business efforts to make Thunderbirds games a go-to destination on weekends in the winter in downtown Springfield, it mirrors the goals of the Florida Panthers and the Thunderbirds hockey  operations departments to develop future

NHL stars in the AHL before they “rise up” to play at the highest level; and #RiseUp encapsulates the Thunderbirds organization’s commitment to bettering the Springfield community by going beyond being a hockey team and an entertainment destination.