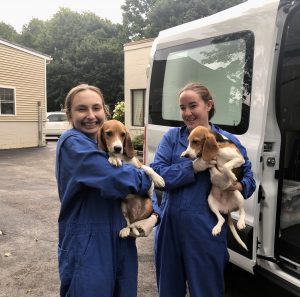 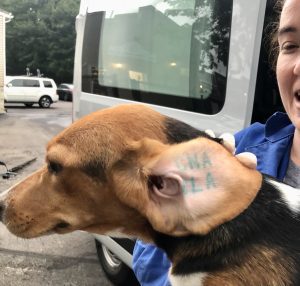 NORTH BROOKFIELD, MA (August 24, 2022)— Two by two, the young beagles were carried off a transport vehicle yesterday to a special place called Almost Home.  Danielle and Cheyanne, two of Second Chance Animal Services’ Almost Home team members, spoke to them in reassuring voices. They made each one comfortable in the nonprofit’s transport facility where they will be prepared for new lives that they can’t even imagine.

Second Chance CEO Sheryl Blancato, who made the trip with Danielle to pick up the beagles from the Humane Society of the United States’ care facility in Maryland, said she was struck by the enormity of the rescue as she spied the tattoo on one of the beagles ears.  “They’ve lived their entire lives inside a facility, known only by the tattoo on their ears,” said Blancato.  “Soon they’ll have names, they’ll learn the feeling of their paws on grass, and they’ll have a place to call home filled with people who love them.”

Today each of the beagles got a name, with each pair sharing a first letter, like Harper and Hadley, and Jukebox and Jive.  The beagles will complete a state-mandated 48-hour quarantine at Almost Home and receive all medical care to be ready for adoption.  This includes any vaccines, a microchip and many other things including spay or neuter surgery for each of the dogs.

Blancato notes, “All of the dogs are between the ages of four and seven months and appear healthy. They were very quiet on the ride, but everything is new to them.  I can’t wait to see them learn to play and just be dogs.”

The Humane Society of the United States is coordinating the removal of approximately 4,000 beagles housed at an Envigo RMS LLC facility in Cumberland, VA which bred dogs to be sold to laboratories for animal experimentation. The transfer plan was submitted by the Department of Justice and Envigo RMS LLC, with the agreement of the Humane Society of the United States to assume the responsibility of coordinating placement. The transfer will take place in stages over approximately 60 days, and the dogs will be up for adoption via Second Chance and other shelters and rescues.

The transfer plan comes as a result of a lawsuit filed against Envigo by the Department of Justice in May, alleging Animal Welfare Act violations at the facility. Repeated federal inspections have resulted in dozens of violations, including findings that some dogs had been “euthanized” without first receiving anesthesia, that dogs had received inadequate veterinary care and insufficient food, and that they were living in unsanitary conditions.

Blancato said interested adopters can fill out an adoption survey or watch the Second Chance website to see when they are available for adoption.  For more information about the beagles that Second Chance is finding homes for or to make a donation for their medical care as they are prepared for adoption, visit secondchanceanimals.org.