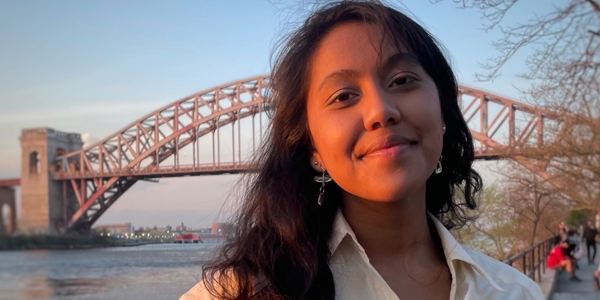 SPRINGFIELD, MA (April 28, 2021) New England Public Media is proud to announce the appointment of Nirvani Williams to its Newsroom. She will cover socio-economic disparities in western Massachusetts for New England Public Media as part of the station’s Equity Desk. Williams comes to NEPM through Report for America, a national service program that places journalists into local newsrooms to report on under-covered issues and communities. It is an initiative of The GroundTruth Project, a nonprofit journalism organization.

“We are impressed with the mission of Report For America and we are honored to have been chosen as a Host Newsroom,” said Maxie C Jackson, Chief Content Officer for New England Public Media. “The Equity Desk is our approach to observing inequality across the region and in all aspects of life in western New England. Nirvani Williams is qualified to focus our efforts and will be a tremendous asset to the NEPM Newsroom.”

Prior to her appointment at NEPM, Williams was the associate editor of Seema, an online publication dedicated to spreading more stories about women in the Indian diaspora, and has written a variety of articles, including a story about a Bangladeshi American cybersecurity expert and her tips for protecting phone data while protesting. Williams interned at WABC-TV’s “Eyewitness News,” WSHU Public Radio, and La Voce di New York — a news site that provides content in Italian and English. She holds a bachelor’s degree in journalism from Stony Brook University, where she was the executive editor of the student-run culture magazine, The Stony Brook Press. Williams hopes to inspire with her writing and to continue reporting on systemic and institutional inequalities in underserved communities.

Williams is one of some 300 journalists placed in over 200 news organizations across 49 states, Washington D.C. and Guam this year by Report for America, which, through its unique funding model, pays half of each RFA reporter’s salary for up to two years and 20% in the third year of the partnership between the news organization and RFA.

“The crisis in our democracy, disinformation and polarization, are in many ways a result of the collapse of local news,” said Steven Waldman, co-founder and president of Report for America. “We have a unique opportunity to reverse this decline by filling newsrooms with talented journalists who not only view journalism as a public service, but who can make trusted connections with the communities they serve.”

Williams will begin her work with New England Public Media in June.

NEPM brings quality public television programs to audiences across western New England, inviting them to experience the worlds of science, history, nature and public affairs, to hear diverse viewpoints, and to take front row seats to world-class drama and performances. PBS KIDS helps children build critical literacy, math and social-emotional skills, enabling them to find success in school and life. NEPM’s locally produced television programming includes the magazine-format public affairs show Connecting Point, the bilingual series Presencia, and the academic quiz show As Schools Match Wits. NEPM is available over the air on digital channel 57-1 and on cable throughout western Massachusetts and northwestern Connecticut and can be seen in high definition in western Massachusetts at Comcast 857, Time Warner 1221, Spectrum 782, and over the air on channel 57.

New England Public Media’s radio presence provides an essential and trusted voice for the region through local reporting and locally-produced music programming, and by connecting the region to the world through its partnership with NPR and other national and international public media organizations. Its flagship signal, 88.5FM WFCR, and 5 repeating stations in Berkshire County, presents news, jazz, and classical music, while the six stations of the NEPM News Network provide the region with news, talk, and cultural programming 24/7.