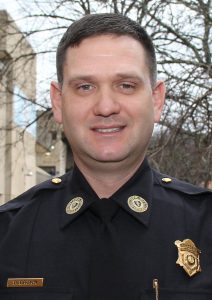 Holyoke Community College (HCC) is pleased to welcome Dale Brown of Sunderland as its assistant director of Public Safety.

Brown comes to HCC with more than two decades of law enforcement experience, both as a military officer and as a civilian.

At HCC, Captain Brown serves as second in command to campus police chief Laura Lefebvre, the director of Public Safety. He started in his new job in January.

Brown is a 15-year veteran of the U.S. Air Force, where he served in military law enforcement as a master sergeant, technical sergeant, staff sergeant, senior airman, and airman. During his service, he experienced multiple overseas deployments, including during operations Iraqi Freedom and Enduring Freedom.