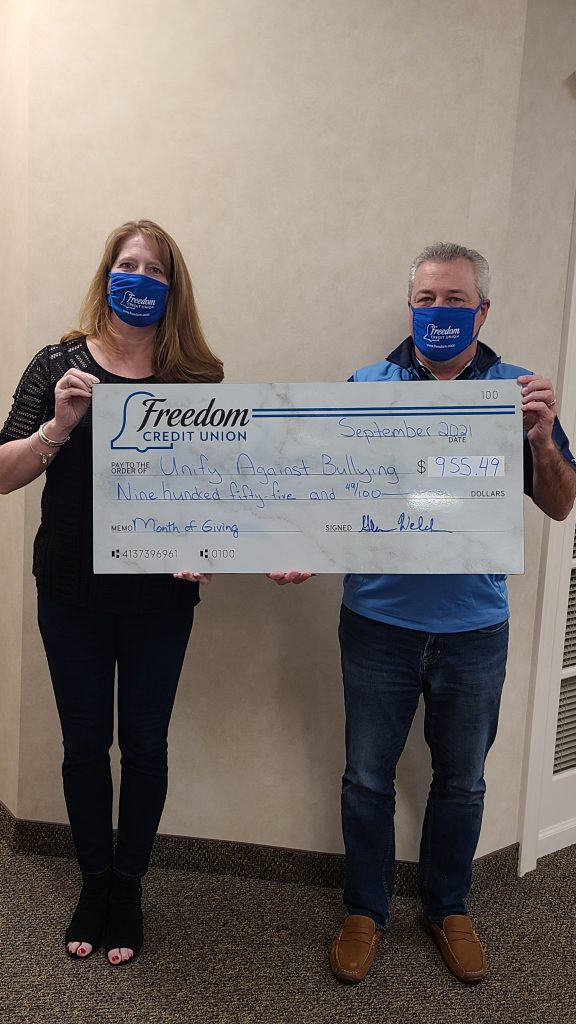 SPRINGFIELD, Mass. – Throughout the month of August, Freedom Credit Union collected cash donations at all its branches throughout western Massachusetts to benefit Unify Against Bullying, raising a total of $955.49 in support of the group’s mission to bring an end to bullying through the celebration of true diversity. The Springfield-based non-profit organization provides grants to those who are in the best position to make a difference—children, parents, teachers and administrators.

“Great strides have been made to shine a light on the problem of bullying, which affects childrenof every shape, size, age, ethnicity, sexual orientation or physical ability,” said Freedom Credit Union President Glenn Welch. “We are proud that our members and staff came together to support the important work being done by Unify Against Bullying to understand and eradicate the stigmas surrounding differences that fuel the majority of bullying.”

Unify Against Bullying works to provide grant funding for schools and other programs where individuals are on the frontlines of potential bullying every day. By providing added resources, they hope to promote awareness and acceptance, show children that the days of ignoring or tolerating bullying are over, promote the celebration of differences and come together as one community.

Debra Mainolfi, Freedom’s West Springfield branch manager, is a member of the board of directors for Unify Against Bullying.

Freedom’s September Month of Giving Campaign focuses on awareness and research for Alzheimer’s. They are collecting cash donations at all of their branches through September 30 to benefit The Alzheimer’s Association Walk to End Alzheimer’s®.