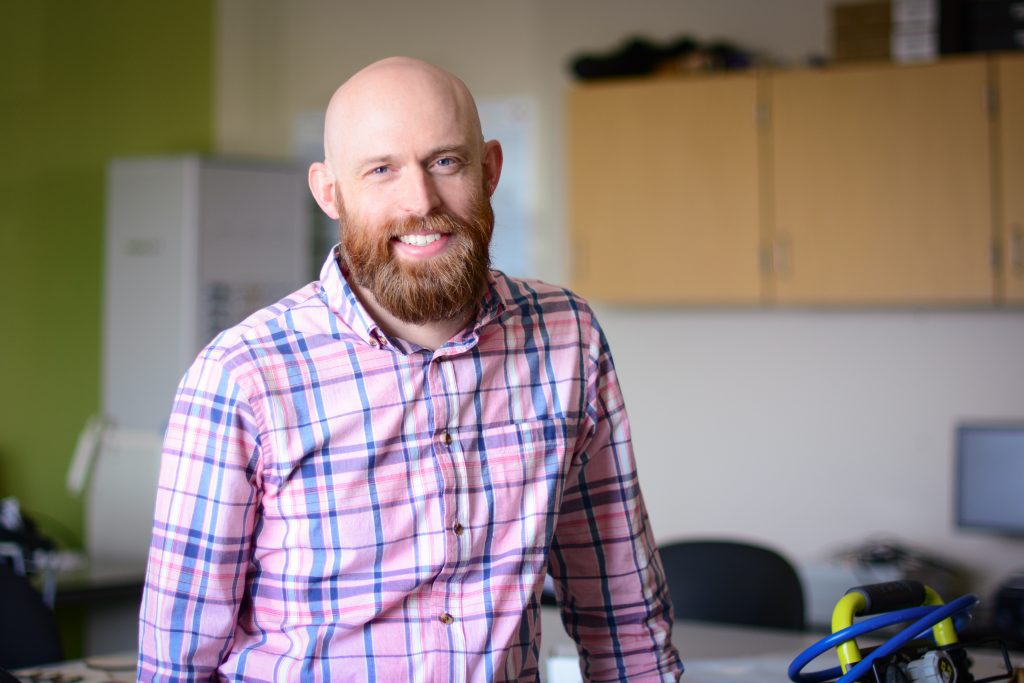 SPRINGFIELD, MA (04/29/2022) Dr. Michael J. Rust, Associate Professor of Biomedical Engineering, has been named the recipient of the 2022 Excellence in Teaching Award at Western New England University (WNE). Winners of the prestigious Excellence in Teaching Award are nominated for outstanding contributions as educators and advisors. The announcement to the WNE community was made on April 27 by Senior Vice President for Academic Affairs and Provost Maria Toyoda.

“Dr. Rust excels and leads in all facets of teaching and mentorship. If you want to see how best practices emerge, just take a look at what Mike is doing both in and out of the classroom,” said Dr. Toyoda.

Dr. Rust teaches undergraduate courses in bioinstrumentation, physiology, lab-on-a-chip, and global health. He is currently the Director of the Honors Program and Codirector of the First Year Program in the College of Engineering.

Nominations streamed in from students, alumni, faculty, and staff who lauded Dr. Rust as a tireless supporter, kind mentor, and passionate teacher. They called him a “pillar of engineering” who has played an instrumental and pivotal role in their studies and careers. His ability to connect and make an absolute difference in individual’s lives is “beyond touching,” they said.

Students of Dr. Rust referred to his courses as “constant, exciting adventures that use a mixture of teaching techniques, bolstered by his positive attitude, and peppered with his dry humor and quirky jokes.”

Another student commented that “He really knows how to teach by learning about his students as people, checking on their mental health, and finding new and relevant material for them in the ever-changing field of biomedical engineering.”

Many nominations praised the life-changing experience of studying public health in Guatemala with Rust’s Global Health and Technologies course. One alumnus called the Guatemala course “one of the most memorable and influential experiences of my education and life.”

Dr. Rust is a Senior Member of the Institute for Electrical and Electronics Engineers (IEEE) and a member the American Society for Engineering Education (ASEE). He has served in many positions for the Biomedical Engineering Division (BED) of ASEE, including Program Chair in 2019 and Division Chair in 2020.

Dr. Rust’s research interests involve the development of point-of-care medical technologies, including bioinstrumentation for use in low-resource settings. He received his BS and PhD degrees in Electrical Engineering from the University of Cincinnati. During his undergraduate training, he worked for Ethicon Endo-Surgery and AtriCure, companies that specialize in the development of novel surgical devices. While completing his doctoral dissertation, Dr. Rust served as an NSF GK-12 Graduate Fellow, which allowed him to develop hands-on engineering activities for high school students.

Dr. Rust’s work has been funded by the National Science Foundation, National Institutes of Health, American Society for Quality, Kern Family Foundation, and the Jenzabar Foundation. He has published numerous papers in technical journals and for professional conferences and is a co-inventor on four US patents. He has also been involved with multiple startup ventures, including FloDesign Sonics, New England Breath Technologies, and OPAD.

As one alumnus wrote, “Dr. Rust is one of those professors that I will forever think of and never be able to thank enough for getting me to where I am today!”

Rust is a resident of Wilbraham, MA.