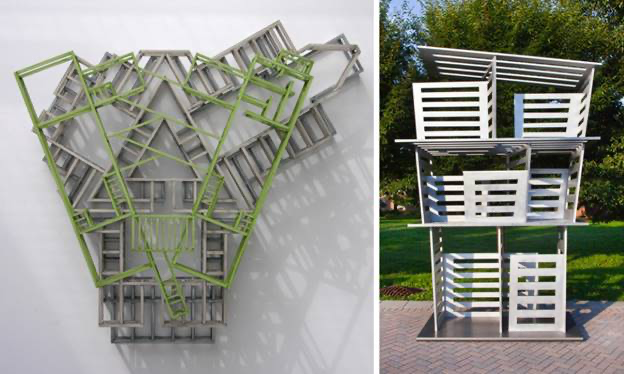 Springfield (MA)—The Springfield Museums announce Constructing Poetry: Sculptural Work by Don Gummer, an exhibit that will take place both within the galleries and outside on the Springfield Museums grounds. Large-scale, abstract, three-dimensional sculptures by the internationally renowned artist Don Gummer will join the whimsical characters in the Dr. Seuss National Memorial Sculpture Garden on the Museums grounds. Smaller sculptures, maquettes, and a painting will grace two galleries in the D’Amour Museum of Fine Arts. Large-scale sculptures will also be added temporarily to the newly renovated Pynchon Plaza, with an opportunity for press to photograph the installation Monday, April 12, scheduled to begin at 9 am.

New York City-based artist Don Gummer has garnered critical acclaim for his work since the late 1960s. This exhibit—assembled exclusively for the Springfield Museums—explores work from throughout Gummer’s long and auspicious career and includes a 2021 wall relief sculpture that has never been seen by the public before.

Visitors to the indoor galleries are invited to explore Gummer’s interest in the act of construction and spatial relationships by viewing wooden wall reliefs created between 1977 and 2021. The exhibition will premiere the artist’s newest work, titled Colosseum, along with a preparatory drawing that provides insight into Gummer’s artistic process.

Outside, on the Museums’ grounds, large sculptural works will enliven the green space and engage in a dialogue with each other, the landscape, and the surrounding architecture.

“Simultaneously formal and lyrical, constructed and poetic, Don Gummer’s three-dimensional works explore ideas about balance, stability, energy, and space,” said Maggie North, Curator of Art at the Springfield Museums. “His large-scale sculptures are extremely dynamic, some even seem to reach, swirl, or expand upward towards the sky.”

These soaring sculptures will activate the outdoor space in Pynchon Park as well. “We are overjoyed to see so many people using the park to walk from down town to the Museums,” said Kay Simpson, President and CEO of the Museums. “With Don Gummer’s work leading the way up the steps, we hope to see even more people accessing the Quadrangle and all of its sculpture.”

“We look forward to our visitors engaging with Don Gummer’s work, both outside and inside,” said Heather Haskell, Vice President and Director of the Art Museums. “We hope this monumental art will inspire others to express their creativity in three dimensions.”

When Gummer arrived at Yale University in 1971, he was exploring a new way of making art, one that sourced inspiration and materials from the land. Made popular by innovators of the 1960s and ‘70s such as Robert Smithson (1938-1973) and Richard Long (born 1945), Land Artworks, sometimes called Earthworks, sought to expand the boundaries of art-making by moving beyond museum or gallery spaces and into the environment. Participating in this movement, Gummer designed sculptures that that combined steel with stones, earth, air, and water. Planned in 1969, Gummer’s Primary Separation was realized and installed at Mass MoCA in 2006. More recent works such as Equator (2011), which is now installed at the Seven Bridges Foundation in Connecticut, continue to find balance between environmental and industrial materials by suspending massive boulders from large cables in order to visualize gravity, space, and form.

Although Gummer is still interested in finding balance with natural materials and spaces, his artistic repertoire has expanded enormously. Drawing from the long history of sculpture, Gummer cites a wide range of artistic role models. Fascinated by the relief sculptures of the 15th century master Donatello (1386-1466), Gummer also enjoys the cubist work of Pablo Picasso (1881-1973), and contemplates the notion of specific objects conceived by minimalist artist Donald Judd (1928-1994) in 1965.

In addition to pulling from the art historical canon, Gummer is excited by natural and built environments, maps and blueprints. His early forays into art were even inspired by cartoons. Each of his works is also informed by a great respect for process. “You have to start from zero and begin, just start by starting,” the artist explains. Therefore, Don Gummer’s works are often the final result of sketches, scale models, and much experimentation.

Inspired by the structured beauty of floorplans, the artist began a series of large, wooden wall reliefs in the early 1970s. In the 1980s and 1990s, Gummer’s work expanded in scale and material as he began to design free-standing sculptures that incorporated various metals and stained glass. Today, Gummer’s works can be found in numerous public collections and have been displayed in locations from Massachusetts to Japan.

Don Gummer, together with his wife Meryl Streep, is an arts/social justice philanthropist. Their Silver Mountain Foundation for the Arts, based in Morristown, NJ, has given millions to arts, education, health care, and human services causes.

In the Artist’s Words

“I was interested in the abstract nature of the floor plans during a time when the floor plan of the building was considered its heart and soul, both magical and practical.”

“All of my wall pieces are also paintings. They are carefully painted to express a moving, active and fluid surface.”

Don Gummer on his large-scale sculpture and the process of creating sculpture:

“I’ll start something, and then as I’m building it, I do something to shift the flow, or the composition or the balance. I have to redirect to correct it. Something happened, then something was recovered. A sculpture is part of a series of corrections that I put in, something that would cause imbalance, then I get it back to balance, and the world’s right again.”

“A lot of my work has some complexity at the bottom, and strives to get more simple as a result. It’s sort of like a building. There is a lot of stuff underneath, a lot of foundation work. But the penthouse is wear you’re headed and you want that to be clear, open space.”

“Sometimes [the pieces] are more like nouns, sometimes their more like verbs… more action. Sometimes they’re just a statement… and right now I’m doing a series of haiku sculptures, they’re five-seven-five, they’re like numbers, there are three levels, visually It’s like the lines”

including the one and only Amazing World of Dr. Seuss Museum

About The Springfield Museums

THE SPRINGFIELD MUSEUMS are located on the Quadrangle at 21 Edwards Street in the heart of downtown Springfield, Massachusetts. The nationally accredited and Smithsonian-affiliated consortium of museums includes the Springfield Science Museum, the Michele and Donald D’Amour Museum of Fine Arts, the Lyman and Merrie Wood Museum of Springfield History, the George Walter Vincent Smith Art Museum, the Dr. Seuss National Memorial Sculpture Garden, and the Amazing World of Dr. Seuss Museum, the first and only museum dedicated to the beloved children’s book author and Springfield native.